The History of the Decline and Fall of the Roman Empire, Vol. II 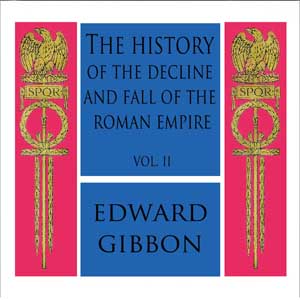 The History of the Decline and Fall of the Roman Empire, Vol. II

LibriVox Recording of The History of the Decline and Fall of the Roman Empire, Vol. II, by Edward Gibbon

The History of The Decline and Fall of the Roman Empire, a major literary achievement of the 18th century published in six volumes, was written by the celebrated English historian Edward Gibbon. Volume I was published in 1776, and went through six printings (a remarkable feat for its time). Volumes II and III were published in 1781; volumes IV, V, VI in 1788-89. The original volumes were published as quartos, a common publishing practice of the time.

Gibbon is sometimes called the first “modern historian of ancient Rome.” By virtue of its mostly objective approach and highly accurate use of reference material, Gibbon’s work was adopted as a model for the methodologies of 19th and 20th century historians. (Summary from Wikipedia)

Uploaded by librivoxbooks on December 8, 2007